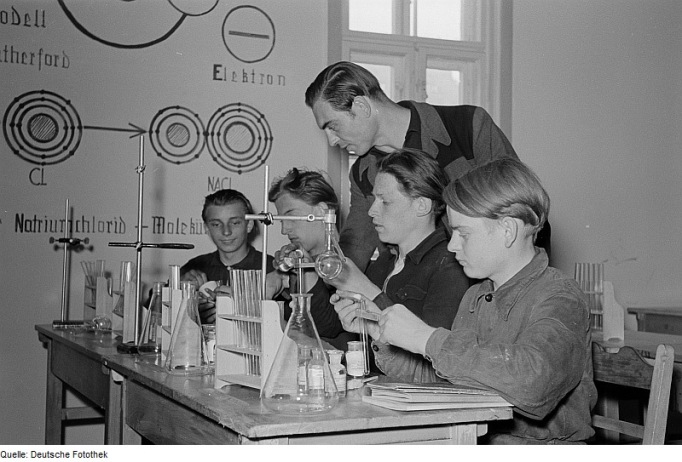 At Edudemic, Jeff Dunn describes How To Get Students Excited To ‘Do’ Science. It’s not as complicated as you might think:

Citizen science programs allow students to participate in real science. To date, students in the GLOBE Program have contributed more than 100 million measurements to the program’s database, creating meaningful, standardized, multi-national professional-grade data sets that can be used in support of university-level scientific research. Scientists at NASA, NOAA and NSF develop the program’s protocols, ensuring students are participating in rigorous, relevant education. Not only do programs like GLOBE foster the next generation of scientists and STEM leaders, but also help students develop critical thinking skills that will benefit them for the rest of their lives.

There are two major principles that make the GLOBE program Dunn writes about such a success:

It lets students do something real.

It lets them really do it.

That second point is key. So many “hands-on” exercises have students performing a simulation of a real experience. Here the students are really doing the measuring and reporting, collecting data that will be used for ongoing research.

As motivating and fun as games and simulations may be, they are by definition at least a step removed from the actual experience. Students are more highly engaged when they are doing something real (and when they are the ones really doing it) in part because of the satisfaction that naturally emerges from accomplishing anything. Learning to use a new tool to perform a particular task is especially rewarding because we get both the satisfaction of accomplishment and the boost that comes along with performing the task better in some way. This is another way of saying that if the tool doesn’t enhance our ability to perform a task, there is no point in using it. The reason technology exists in the first place is to increase our capability. A car, for example,  increases how fast and how far we can move. Or a calculator increases how quickly we can come up with the answer to a complicated math problem.

When we provide students with tools that make them even more effective at doing something real, we are firing on all cylinders. Make those things happen in concert and you have a highly engaged classroom.

Here is a good infographic found on The Principal of the Thing:

Yes, the wrong answers are all wrong, but maybe there are more right answers than what we see here.

Technology helps  students to engage with course materials, make choices, and develop skills in ways that the traditional classroom can’t. Students can define goals, make decisions, and evaluate their own progress — plus connect with others doing the same.

The relatively small city of Zhongxiang in Hubei province has always performed suspiciously well in China’s notoriously tough “gaokao” exams, each year winning a disproportionate number of places at the country’s elite universities.

Last year, the city received a slap on the wrist from the province’s Education department after it discovered 99 identical papers in one subject. Forty five examiners were “harshly criticised” for allowing cheats to prosper.

So this year, a new pilot scheme was introduced to strictly enforce the rules.

When students at the No. 3 high school in Zhongxiang arrived to sit their exams earlier this month, they were dismayed to find they would be supervised not by their own teachers, but by 54 external invigilators randomly drafted in from different schools across the county.

The kids in Zhongxiang apparently didn’t take well to their new exam monitors (nor did their parents.) When the exams ended, the school was overrun with protestors. The monitors ended up hiding out in school offices waiting for assistance from the authorities. Meanwhile, the protests grew into a full scale right.

Outside, an angry mob of more than 2,000 people had gathered to vent its rage, smashing cars and chanting: “We want fairness. There is no fairness if you do not let us cheat.”

Just let that one soak in for a moment.

The argument is that since cheating is rampant in China, and all but sanctioned, preventing the students in Zhongxiang from cheating amounted to depriving them of their rights. Interestingly, after the police stepped in, some of the officials commented that the monitoring of the tests had, indeed, been “too strict.” It’s unclear whether this was a quasi-official endorsement of the notion that fairness can’t be found if cheating is prevented, or whether the officials were just trying to throw a bone to the enraged students and parents.

We’ll know in time which it was. If the exam results are thrown out, cheating is more or less endorsed as a matter of policy. If they are allowed to stand, it isn’t. Quite.

Reading the linked news story, it becomes clear that the students were highly reliant on technology to enable their fantastic test scores. Smart phones, in particular, played a big role in helping to get the right answers into students’ hands an onto their exam papers. For future anti-cheating measures to work, it may be necessary to marshal technology in support of the monitoring effort. (For one thing, human volunteers might be hard to come by after this.) It will be interesting to see what kinds of measures are eventually put in place.